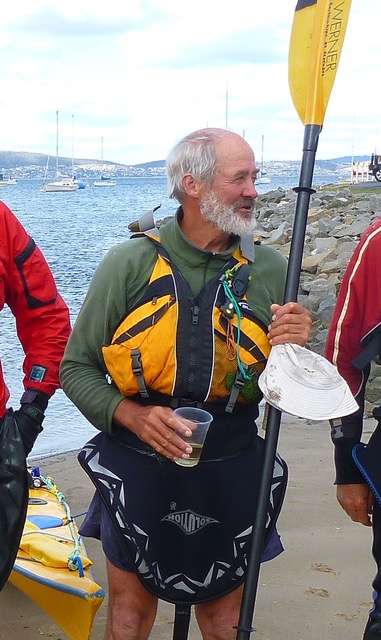 It is with sadness that Paddle Tasmania marks the passing of one of the pioneers of canoeing in Tasmania – Tony Gaiswinkler, 73, – who died on the Derwent River, near the Regatta Grounds, while out paddling on Wednesday 21 July 2021.

Fifty years ago, in 1970/71 Tony and a group of likeminded, adventurous paddlers in their early 20s, formed the Derwent Canoe Club. Designing and building their own boats and equipment they explored wild rivers and Tasmania’s rugged, beautiful and at times dangerous coastline. Having formed a club, later that year Tony and the DCC combined with Tasmania’s other main club to form the Tasmanian Canoe Association, now Paddle Tasmania.

Increasingly in love with expedition sea kayaking Tony and others formed a sea kayaking sub-group within the DCC which later evolved into its own club – the Tasmanian Sea Canoeing Club with Tony a Founding, and later Life Member. Over almost 50 years with the TSCC Tony held every executive position and in less certain times early in its existence, is credited by some with holding the club together.

Tony firmly believed that clubs were not only for paddling but for creating life-long friendships and he mentored and trained new paddlers, bringing them into the extended canoeing family. He also helped build innumerable sea kayaks and equipment and was closely involved in Tasmanian sea kayaking design and innovations later adopted word-wide.

Over the years Tony planned an undertook previously undreamt-of expeditions and built a vast reserve of knowledge and folklore about Tasmania’s wildest and remotest coastlines. Preparing for the first extended West Coast trip ever attempted by kayak, in an era before GPS, Google Earth, modern communications and with only rudimentary and often inaccurate Charts, Tony chartered a small plane to survey the coast, taking aerial photographs to help map potential safe landing sites and hazards to avoid.

Ultimately Tony paddled virtually everywhere it was possible to paddle on Tasmanian coastal waters and throughout Bass Strait, undertaking extended open ocean crossings, landing on remote and treacherous islands, and somehow surviving the stench of guano and seals at some overnight camps. He and other Tasmanian Sea canoeing Club members also undertook international expeditions including extended trips around Japan, the South Pacific and Mediterranean islands.

Having turned 73 Tony was still actively paddling and during the summer of 2021 he completed a Cockle Creek to Port Davey and return trip – an epic multi-week trip, taking in some of the most exposed, remote, spectacular and unforgiving coastline in the world. And apparently, he was still using his home-made dry-bags, made in an era before buying them off-the-shelf was possible.

Our condolences to his family, friends and all the members of Tasmanian Sea Canoeing Club on the sad loss of a true legend and pioneer of Tasmanian paddling.

ABOUT US
Paddle Tasmania aims to encourage safe enjoyment of all paddlecraft, including canoes, kayaks and ocean-skis among others.
© 2021 Paddle Tasmania